Ms. Norris continued, “Because our practice is in such close proximity to the beach we see a real emphasis on photochromics. The photochromic line by Super Optical called Conversion has proven very successful in providing exceptional customer satisfaction along with significant cost-savings versus the expensive name brand Photochromics offered by the local area Labs. And, best of all, if one of our patients is in a real time crunch we can even use our FastGrind to offer same-day or while-you-wait service! 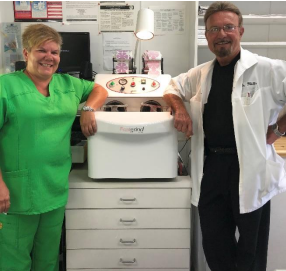 Just after the original installation Dr. Mills confirmed that, “Patient flow has been one of the most important benefits of the FastGrind. My staff can check a patient in at eight in the morning and at nine she has the finished product and is ready to start her day.” Getting patients in and corrected without having them return for pickups has been a real asset in attracting patients. Some patients come from as far as 30 miles even though there are plenty of eyecare offices closer to their homes,” he said. “They come to my practice because they know they don’t have to take that extra morning off from work just to pick up their glasses.” Lab Manager Christy added, “Even though we don’t typically promote such quick turnaround, but it is really great to see a patient’s face light-up when we are able exceed their expectations in such a powerful way.

In addition to the quality of Super Optical’s Conversion Photochromic lenses Christy Norris had very positive reviews for the FastGrind’s Multi-Focal lines including FT28 and ADDvantage HD Progressives. “The overall quality is as good or better than we were receiving from our local area Labs” she said, “And combined with the quicker turnaround
and savings it’s easy to see why we end-up using our FastGrind for about 95% of our multifocal prescriptions. With the high-quality design in Super Optical’s ADDvantage Plus Progressives our rate of non-adapts is a small fraction of what is was through our local Labs. And that’s proven true for first time as well as longtime progressive wearers.”

In conclusion, when asked to comment on Super Optical International’s Customer Support for the FastGrind System and the ‘Learning Curve’ for new Operators Christy again had only positive observations, “In a decade of consistent use our FastGrind has required only minimal maintenance and, although we have only rarely needed it, the free personalized Customer Support stands out in a World were all too often you end-up talking to a recording instead of a human. Over the years we have trained many new Operators with varying degrees of ‘mechanical aptitude’ and the onscreen step-by-step instructions that the FastGrind System provides has made it a snap to get new Operators up-and-running after just a few practice lenses. It really is true that anybody can learn to use the FastGrind!”