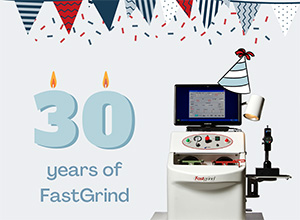 Cincinnati, OH – April 2021 —Super Optical is excited to be celebrating 30 years since they first debuted FastGrind, the compact in-office modified lens surfacing system. It was first released in 1991 with a mission to help independent ECP’s decrease their lab bills and increase customer satisfaction. Since its inception, FastGrind has been implemented by independent eye care professionals in over 55 countries including by the US military. Over their 30 years Super Optical has sold more than 2.5 million FastGrind lenses. Thanks to its unique position in the market, Super Optical saw an increase in demand for FastGrind amid the uncertainty of COVID-19 closures. The FastGrind system has been an invaluable asset to ECPs, allowing them to have pricing freedom and the ability to provides same-day glasses.

Don Gilman, CEO of Super Optical, said that his inspiration for designing and developing FastGrind came from his years spent rebuilding edgers to offer customers an affordable edging lab in the mid-1980s. “Our customers started asking if we had any rebuilt surfacing equipment available so that they could have more independence and save more on the finished product. The generators were too big to fit in the equipment we used to clean and rebuild the edgers so Super Optical embarked on a simpler, less expensive way to surface lenses. After a few years of development, we were able to release our first version of FastGrind in 1991.”

A look back over FastGrind’s evolution. The original FastGrind model stood 4 feet tall and looked similar to a traditional laboratory polishing system. Next, FastGrind shrunk down to about the size of a table-top edger. The last major overhaul the FastGrind’s physical appearance came in the mid-2000s when a PLC was incorporated. This allowed speed, water, and time-to-run all to be controlled by software. Now, FastGrind’s software has been at the heart of the improvements ever since. With a simple download, existing customers can easily incorporate new lens types, increase accuracy, and make the overall system more user friendly. Therefore, FastGrind will never go obsolete. Super Optical has customers operating the original system since 1991 and processing all the new lens designs.

Super Optical will be offering various promotions throughout the year tied to this milestone as well as something very special to their existing customer that have made these past 30 years so great.